It’s fall and I am finally playing hoops again after a two-month break.I’ve played hoop in this gym since returning to Concord 25 years ago. Hoops balances me. It’s great fun, and it’s teamwork in pursuit of a win. I love teamwork — and team wins!

So, with hoop season winding up and basketball on my mind, I was thinking about my two favorite basketball quotes.

First, from Coach John Wooden of UCLA fame comes, “Things turn out best … for those who make the best … out of the ways things turn out.”

To me, I read at least two meanings that are true to me:

A positive outlook is the only way to produce positive results; and,

All things follow something and since the greatest influence on you is you, how you approach things really matters.

In both reads, I think about how I can change what I’m doing to produce the best result for what we’re trying to accomplish. I say it often, “There’s only one thing in life I control, me.”

What does the quote mean to you?

The second I’ll need to paraphrase because it’s been a long time since I read what Phil Jackson said to Michael Jordan early in their impressive run together in Chicago. Essentially, Jackson told Jordan, “You’re a good player but you won’t be great until you make other players on your team great.” 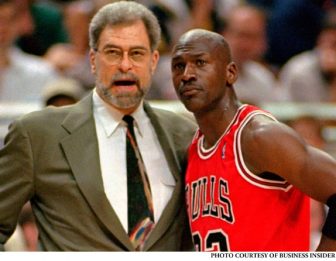 We all know Jordan to be a great player — to my mind still the best ever — but what Jackson was saying is that basketball is a team sport and you need all 5 on the court and in fact all 8 or 9 who play generally all playing great. Jordan needed to make others great.

Team sport athletes know what I am saying. And, even if you didn’t or don’t play, you know what I’m saying because we’ve all been in groups with a person who makes other people perform well. We’ve also been exposed to someone who brings everyone down.

To my mind, there’s one thing about that person who brings out the best in others: They celebrate the others’ success. Sometimes they might contribute to it but universally, they celebrate it.

As community leaders, there are takeaways here. Be a positive leader who celebrates peoples’ contributions. That is how you build a community of contributors who are individually contributing because it feels good!

Tell me, has that been your experience?