Martha and I celebrate our 25th year of marriage in August.  Our present to ourselves was a trip with our daughters, Lila (17) and Jane (14) during the first two weeks of July.  Ireland was picked in part for simplicity’s sake; English-speaking and a six-hour flight were significant factors.

To grow up in New England – as we both did – is to have a connection to Ireland, through family, neighbor, or workmate so that played a part, too.  While we have no known family in Ireland today, we have family histories that include the island republic, with family names like Jameson, Clarke and Calnan.

For us, the beauty, hiking and history were strong attractions.  We were sight-seers and doers.  Our pace was relaxed, ambitions reasonable.

We visited County Clare on the west coast – the Burren region where you find unique limestone and grassy splattered hills that fall to the sea’s edge with grace.  Cows and sheep outnumber all other visible inhabitants.

We hiked one Burren nearly to the summit, and drove the Atlantic Way to the Cliffs of Moher – the most remote, picturesque, and highest ocean walk I’ve ever been on.  We had to sit for a bit to adjust to the 400-foot cliffs that were just a foot or two from our own!  Add 20-knot gusts and it’s not for the faint of heart. 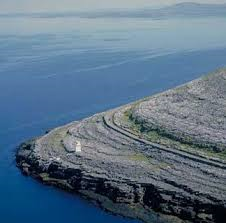 We toured a cave where bear once slept and were introduced to efforts to reintroduce birds of prey, including the Sea Eagle, a bird of extraordinary size.

We drove south to Kilarney in County Cork for more incredible seascapes on the Dingle Peninsula, hiking, castle touring, surfing lessons and as much traditional dance and music as we could find.  We also indulged in traditional Irish food falling short only with blood sausage.  I just could not do it!

I have taken surfing off of my aspirations list – I am to slow to rise to my feet – but I was there trying while Jane excelled at it.  Hope for those of us getting up there in age is alive though: Van Morrison in concert in Cork at 72 sounds as strong as his music in my collection from 30 years ago. 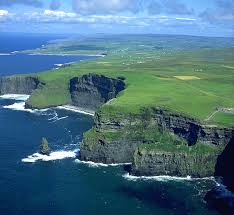 A stop in Kilkenny on Saturday introduced us to an immense castle followed by roving bands of brides-to-be and their bridesmaids out for what I was told is a “hen party.”

After so much beauty in natural landscapes and small villages, the large and bustling Dublin – which seemed necessary in the planning stage – was a juxtaposition to grandeur of the southwest of this truly jaw-dropping and idyllic island.

As the travel planner, I was up on the basics.  But, two things about Ireland really surprised and impressed me.

This is a country built upon small independent business and local ownership.  In small towns and larger cities alike, there’s an abundance of small, locally owned businesses.  I suppose it’s no surprise in villages but in the larger towns and cities, too, there are only a few chains.  It’s the sort of economic model that retains most of the created wealth in the places from whence it is derived.

To help build the local economies, agencies have been running a competition called “Tidy Towns” for the last 57 years.  You see the signs upon your arrival in the town – “A 2014 Tidy Town Winner” – and the impact is clear.  This is not only a country of beautiful landscapes but also beautiful built-scapes that are incredibly well-maintained.  I was told of local groups working together to make and keep their town tidy, all in the name of economically and visually vibrant communities.

We celebrated our marriage, touched our roots, enjoyed the people (who to a person were just plan nice) and places and came to find that there’s so much to like about Ireland.  And, remind us yet again there’s so much to love about life, love, family and the places we each call home.