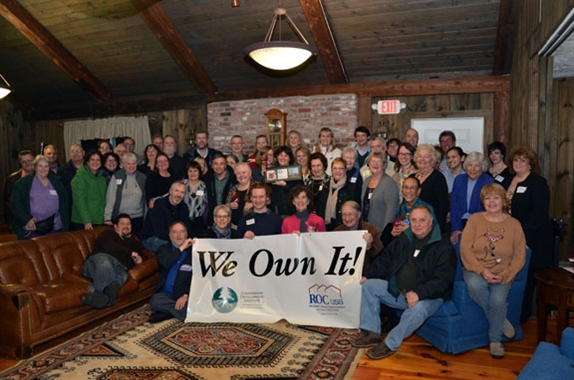 There is nothing more fun for me than getting out to two ROCs in a single evening and seeing representatives from a handful of ROCs in a region.  I spend a lot of time traveling and working in places that are critical to serving our mission but which are not resident-owned communities themselves.  So, last Wednesday night was very special.

I was in Providence, Rhode Island, for the Winter Meeting of the eight TA provider organizations that form ROC USA Network.  TA staff from Washington state, Montana, Utah, New York, Minnesota and New England had come in on Monday for three days of meetings and training.  We do this twice a year.  I was happy that this time, Colleen Preston, the ROC Association Director from New England, was able to join us for all three days!  She contributed a lot and reported getting a lot out of it, too.

Wednesday night was really special.  We boarded a bus as a group of 30 and drove to Carver, Mass., home to two ROCs, about an hour away.  In Carver, we picked up Donna and Susan from Pine Tree Village Association, a 186-home ROC, and took a drive through the community.  Wow!  What a difference!  They bought their community in June 2012 and have invested nearly $300,000 in septic, tree removal, a new office and playground upgrades.  Those changes were evident but even more evident to me was how much better people were taking care of their homes!  The community looks great!

Donna capped it off for me.  She said, “We had an open house for REALTORS – only one showed up – but that’s OK, we’re attracting new buyers because word is spreading that something good is going on at Pine Tree.”  Outstanding, Donna and company.  Your hard work is paying off.

We then drove to Cranberry Village (280 homes) where volunteer members had gone way beyond what anyone expected.  The new meeting space – just rehabbed by a few of the guys on a volunteer basis – looked great and held the 60 plus people gathered really well.  Candles and centerpieces adorned the tables and friendly faces and warm hands greeted guests.  No stone was left unturned by CVRA members in preparing for the party!  Thank you, all.  It was incredible.

Several ROC leaders from near and far came, including leaders from Wamsutta, Hillcrest, and Wheel Estates.  With Pine Tree and Cranberry leaders there, too, it was a terrific opportunity to talk about ROC opportunities in the region and beyond.

There were a lot of ideas shared and relationships built.  These ideas will be put up on ROC Talk by Cathy and will be revisited when these same leaders and more get together for a Regional Leadership event on May 3 in southeast Mass.

We were there to connect with ROC leaders and see these two ROCs as well as to celebrate the Cooperative Development Institute’s 20th year as a nonprofit co-op TA center.  CDI serves the needs of co-ops in many sectors (food, agriculture, worker ownership, etc.) and joined ROC USA Network three years ago to serve co-ops in the MHC sector.  We’re delighted to have them as a part of the Network.  Congratulations CDI!

And, thank you to all who could make this event.  It was very special.