Few articles capture the significant challenges that manufacturers of Manufactured (HUD code) Homes as well as this recent Costar article. The history reported here is true: The industry and its consumers were hit with three successive punches, and the impacts are ongoing today. 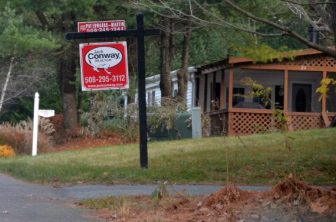 The first punch (or self-inflicted injury): In the 1990s, a torrid of production and financing brought on by aggressive home lending led to significant loan losses in the early 2000s. The December 2002 bankruptcy of Conseco (which bought Green Tree’s MH loan portfolio) was the third-largest to that point in our country’s history. The loan losses and repossessions – a full 1 million in Southeastern U.S. states – led to a withdrawal of lenders and capital for financing homes.

The second punch: When MH lenders were reeling from its credit losses, the site-built house market was taking traditional MH buyers with its own aggressive lending practices. There were points in the early and mid-2000s that you could get into a home five times more expensive than a manufactured home because of exotic financing and expense MH financing. The result was a sub-prime crisis in the conventional single-family market, and near financial systems collapse!

The third punch: The sub-prime run-up that culminated in 2007 has been followed by a regulatory reaction aimed at making sure that doesn’t happen again. And, MH has been pulled into it, which has lenders unsure whether to stay in or re-enter the MH finance market.

The result is a now 14-year crisis in the financing of MH, especially in communities.

ROCs offer lenders a different risk profile, a better loan risk. No ROC has closed down and forced homeowners and their homes on to the streets. One lender – the NH Community Loan Fund – who specializes in lending on homes in ROCs has a better track record than most every other home lender. ROCs thrive when homes and lots are occupied by paying Members. To get there, ROCs need home lenders. Be sure to tell supervisors in your bank or credit union that your ROC is working. ROCs need good home lenders – and the more the better.