GENESEO, N.Y. — At Lakeville Village, the residents are conscious about creating a better world for their grandchildren. That’s why they are installing a 20-acre solar array to provide green energy to their community.

Long before the residents incorporated to purchase their community, they knew about the undeveloped land to the north. And for a long time, the residents wished they could use the land to build a solar array.

“The original owner of the community had anticipated a second phase for the construction of additional homes, but it never came to fruition,” said Ron Palmer, Member-owner of Lakeville Village and the chair of the solar committee. “This provided an opportunity for us to consider other options. When we became a ROC in 2016, the solar project really started to come to the forefront.”

‘If the land works, we’ll pay you’

The 58 acres of land set to the north of the community was full of thorn brush. The original owner had plans to place more homes, but the brush made it expensive to clear and even more expensive to install infrastructure.

Under the leadership of Richard Nereau, Alice Dunn and Anne Radesi, Lakeville Village began to get the ball rolling on a solar project. Nereau and Radesi contacted solar companies, many of which wanted to charge the community to come visit the land.

After some searching, they found Michael Roach at RER Energy Group, who said, “If the land works, we’ll pay you.”

The land worked, and Lakeville Village and RER went through many rounds of negotiations on the lease of the land. Palmer credits Radesi with being the force behind the successful negotiation process.

The gist of the terms ensures that none of expenses of the $5 million project are the responsibility for Lakeville Village. In turn, leasing the land to RER will generate $17,000 per year to the community – money that will sustain the community’s roads and expenses and will help offset Members’ site fees.

After the lease was set, Lakeville Village and RER approached the Town of Geneseo to get permissions, only to hit a snag – they were the first to propose a solar project in the town, and therefore the town didn’t have any guidelines on the books. The town was diligent in establishing guidelines, bringing in the Army Corps of Engineers and habitat protectors in to assess the project.

“In total, it took a year-and-a-half to get the go-ahead from the town, but we’re thankful they were willing to work with us. We’re good neighbors. We don’t want to cause problems to the town or the environment,” Palmer said.

In fact, Lakeville Village is so considerate of their neighbors that they have ensured that the energy their panels generate goes directly into the town.

“The solar produced is not going up into the super highway of energy,” Palmer said. “We wanted ours to be a community solar project, so we opted to provide energy to 880 local homes instead of sending our energy to a bigger city.”

The project officially broke ground in June with the clearing of the land, which took a month to complete and was initially delayed by COVID-19. In total, 40 acres were cleared, 20 of which will be used for the solar array.

After clearing, installation of underground lines and metal posts occurred and now the solar panels are being installed.

The feed lines to National Grid’s system are being installed ahead of schedule, which means that the original commission in March 2021 has been moved up.

The project will provide solar to the Lakeville’s neighbors for at least 25 years. The residents of Lakeville Village took one more step to guarantee the community’s future: When the 25-year lease ends, if RER elects to decommission the site, they have to remove the panels and support posts. That will leave the community with a flat, clear lot – perfect for new home sites. 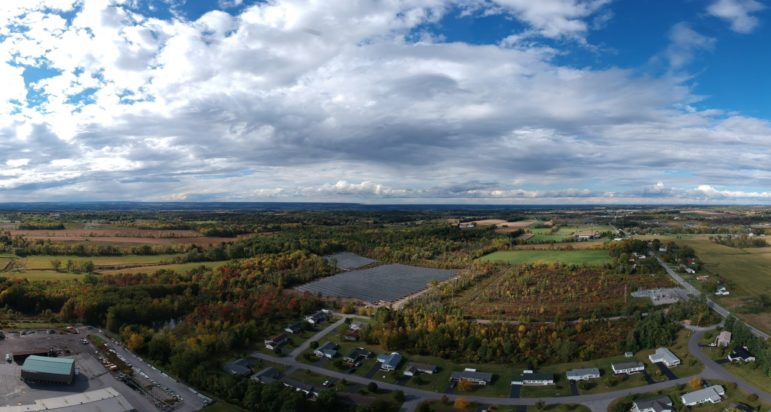