PASADENA, TEXAS – Hurricane Harvey brought strong winds and months’ worth of rainfall to the Texas shoreline this week, prompting disaster declarations, billions of dollars of damage, and countless dramatic rescues caught on film and broadcast to the world.

While Harvey is certainly a storm for the record books, devastating hurricanes are fairly frequent visitors to the region. That’s why when the residents of Pasadena Trails, a 105-site manufactured home community (aka “mobile home park”) just southeast of Houston purchased their neighborhood from an Arizona company, they made a list of improvements they wanted to make. Near the top of that list was finding a solution to the poor drainage in their community that pools of water at both community entrances and the school bus stop every time it rained.

That came as a bit of a surprise to Michael Sloss, managing director of ROC USA® Capital. ROC USA Capital financed the resident purchase at Pasadena Trails and made capital improvement loans to the cooperative that residents formed as well.

“They are certainly one of the few borrowers to make drainage and storm water management a top priority for capital improvements,” Sloss said. “As Harvey showed us, that was incredibly smart forethought on their part.”

“Everybody at ROC USA® was concerned about Pasadena Trails, and I was keeping up with the Board with an ongoing group text all through the storm,” O’Hara said. “Everyone was frightened, both for themselves and others. They were afraid what they were seeing on the news would happen to them, but every couple of hours I got a text that said while was very windy and raining incredibly hard, everyone was OK.”

In fact, the drainage system kept standing water from building up and the co-op’s tree maintenance in recent years kept Pasadena Trails safe. Two homes reported leaky roofs, and Board members dispatched volunteers to cover them with tarps.

“As the storm progressed, I got a lot of texts with angel emojis and praying hands,” O’Hara said. “In the end, everyone felt blessed.”

O’Hara said hiring an engineer to comprehensively redesign the neighborhood’s drainage system was the top request from all the homeowners at the resident-owned community. They made several short-term fixes, and after several years of resident ownership, Pasadena Trails refinanced their loan and borrowed additional funds to finance the project.

O’Hara said Rafael Ortega and David Pineda of Aurora Technical Services helped guide Pasadena Trails through the entire process. She praised their thoroughness and ability to boil down the engineering work to make it easily digestible for Board members in English and Spanish.

“They got the bids, supervised the work, and didn’t sign off on anything that wasn’t to their satisfaction,” she said. “Clearly the quality of that work paid off.”

As it turned out, Pasadena Trails’ diligence is paying dividends in the greater Houston community. With no immediate needs of their own, residents are reaching out to their less fortunate neighbors who did not come through the storm dry. Members have been participating in relief efforts in the wider neighborhood, collecting lightly used clothes, kitchen items and more for people who have lost everything. 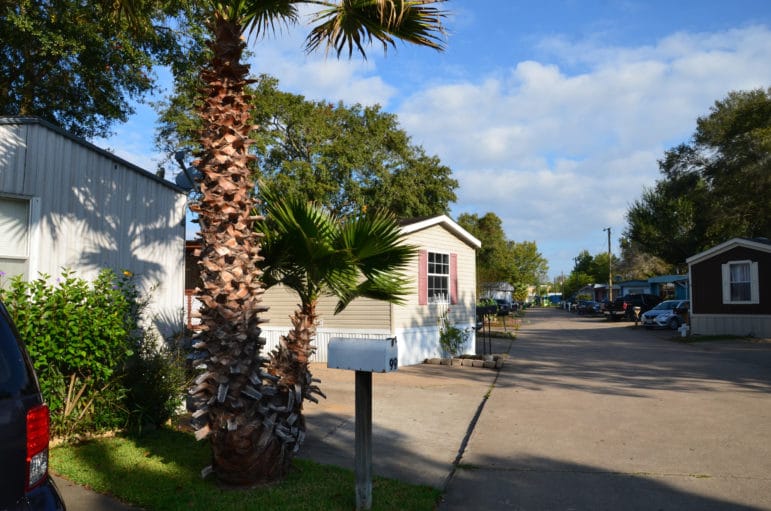