Danvers, Mass. – Long a part of the Danvers landscape but now taking on a new life, the Glen Mobile Home Park, located just off Route 1 at 200 North Street, has been purchased by the homeowners who live there. Known at one time as Ben’s Mobile Home Park, and way back in the 1940s as Ben’s Cabins, and before that as a campground, the community now has been renamed by the residents as North Street Association. They are running it as a democratic cooperative, with an elected Board of Directors overseeing day-to-day operations, and a very engaged membership making all the major decisions in a town meeting style format.

This is a completely new venture for these homeowners, who sprang into action last spring when the Nangle family, owners of the park, notified residents of the impending sale of the 77-unit community. A Massachusetts state “option to purchase” law required the Nangles to first give residents 45 days to organize themselves, create an incorporated association, and get a majority of residents to agree to pursue their legal right to purchase at a price matching the offer received by the owner. And that they did.

With the help of the Cooperative Development Institute (CDI) and ROC USA, two non-profit organizations dedicated to facilitating and helping fund purchases like this, the residents were able to get a mortgage to cover the $4.75 million price tag and enough extra to take care of some immediate infrastructure and repair needs.

Joe Cicirelli, CDI Program Director, praised the Nangle family’s cooperation in selling their community to the residents of Glen Mobile Home Park. Cicirelli said the leaders of the new association have spent the past few months focused on learning more about their neighborhood and acquiring the skills to manage a multi-million-dollar business moving forward.

Bill St. Pierre, a 32-year resident of the community and member of the new Board of Directors, talks about the challenges facing communities like his. “Not being able to have a say in anything that went on – and then being at the mercy of the owners to either pay the rent increases or leave – that wasn’t fun,” he says, highlighting a problem facing residents of manufactured home communities nationwide. Residents in these neighborhoods own their homes (sometimes anachronistically called “mobile homes”), but not the land the home sits on. If rising lot rents force them to move on it’s often not feasible to take their home with them. The cost to move it can be prohibitive, if it can be moved at all – many cannot. Homeowners are stuck in a home they can no longer afford, and their options are limited.

This is where ROC USA® comes in. A non-profit whose sole function is to help these residents become resident-owners, they have developed a business model 30 years in the making that puts these fledgling communities on what they say is a proven road to success. ROC USA has helped 288 communities across the country – with nearly 20,000 homeowners and their families — take control of their own future just as North Street Association has. ROC USA’s Community Development Financial Institution subsidiary, ROC USA® Capital, partners with banks, local and national, to deliver financing to make these purchases possible. They coordinate ongoing training opportunities with regional affiliates such as CDI through their network, so communities aren’t left on their own as they begin their journey.

Paul Bradley, president of ROC USA, congratulated the North Street Association. “This is a perfect example of a community showing confidence in itself and its neighbors,” Bradley said. “Resident ownership continues to deliver members increasing value in Massachusetts and across the country with stable rents and resident voice into important issues like neighborhood rules, infrastructure improvements and an increased sense of community.”

CDI provides intense training to new boards and to the membership as a whole in five New England states and parts of New York. They stay very close to the community, offering training, coaching, and advice, for at least 10 years, often longer. North Street Association was helped through their purchase process by CDI’s Nora Gosselin and Andy Danforth.

“The North Street Association has a group of committed leaders in place who have driven this process of buying,” said Gosselin, CDI’s Market Development and Acquisitions Specialist.  “I have no doubt they will be incredibly successful in making decisions – from infrastructure work to infill – for their community.”

And now the work begins. Plans will soon be underway to address a badly eroded brook bank that affects three homes. Infrastructure upgrades and repairs are on the docket. Five abandoned homes will be sold, renovated, or replaced. There are about half a dozen empty lots ready for new homes. Progress is in the air.

“It’s comforting to know that the increase in rent is going towards long overdue updates and improvements in the park’s infrastructure rather than an investor’s bottom line,” said Board Vice President Ilze Macaulay.

And to St. Pierre, it’s all good. He reminisces about a neighbor, since deceased, who lived here even longer than he has. She talked about a circus performer who lived in the community and set up a trapeze to practice on, entertaining all the neighbors.

From campgrounds and Ben’s cabins and trapeze artists – this is a place with a very rich history.  But unlike many similar communities, the story does not end there. “We are very excited to see what an independent future holds where the decisions are in the hands of the residents,” said Board President James St. Pierre. This community won’t be demolished and replaced by something corporate or gradually destroyed by rising rents and abandoned homes. There are 77 homeowners, now landowners, who have seen to that and who stand ready to start writing their own history – the North Street Association chapter.

The Cooperative Development Institute is a regional 501(c)3 non-profit founded in 1994 by co-op leaders in the Northeast. Cooperative Development Institute’s mission is to work with people in the Northeast to create cooperative businesses and networks that grow a prosperous, equitable economy. We are transforming ownership of our economy, so all people can meet their basic needs. To date, CDI has supported the conversion of 52 manufactured housing communities to resident owned cooperatives and continues to provide ongoing technical assistance to residents managing their communities.

ROC USA (rocusa.org) is a non-profit social venture with a national network of 12 organizations (such as Cooperative Development Institute) and a national financing source for resident corporations. ROC USA® is sponsored by the Ford Foundation, NeighborWorks® America, Capital Impact Partners, Prosperity Now, and the New Hampshire Community Loan Fund. The Community Loan Fund, a non-profit community development financial institution in New Hampshire, leveraged its experience with 90 resident-owned communities at the time to launch ROC USA with national partners in May 2008. All told, ROC USA Network has helped 288 communities preserve 19,740 homes in 20 states. 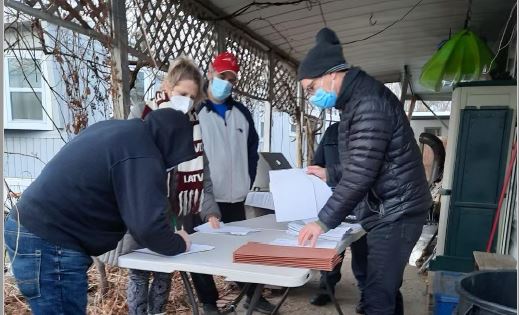