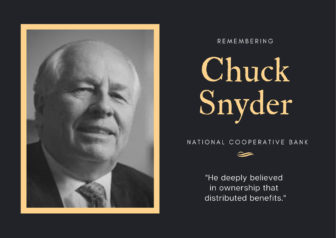 I am saddened by the death of Charles “Chuck” Snyder. I last spoke with him a month ago on a call he was hosting for innovators committed to practicing Cooperative Principle 6 – cooperation among cooperatives. He and a few others were leading conversations with practitioners about how to work together to dramatically expand co-op ownership in the U.S.

That was a typical day for Chuck. He was always looking for ways to expand co-op ownership because he deeply believed in ownership that distributed benefits – be they wages and earnings, revenues, or savings – broadly and fairly. And he loved engaging with others.

Before that group call, however, was one of my favorite interactions with him. Mike Bullard and I attempted to record an Ownership Matters podcast with him last spring. Unfortunately, we ran into technology issues and had to postpone it after getting only a little ways in. I am now heart-broken we didn’t get it completed.

But what we did get the first time was precious and says so much about Chuck.

I asked him how he got into co-ops, and he explained that he took his first job at a credit union. And I think he said, one of his first loans was to a single mother who faced homelessness. The credit union, with Chuck as the young loan officer, made her a $200 loan so she could rent an apartment.

She returned to the bank every month with her payment and she and Chuck would talk. She was so grateful for his trust in her.

He said, “It was through that experience that I learned the power of cooperatives – the power to have positive impact on peoples’ lives. I was hooked!”

Chuck rose to become the CEO of National Cooperative Bank, a multi-billion-dollar bank that lends exclusively to co-ops. I guess that’s hooked all right. Through his rise, he never forgot the importance of small co-ops. He was drawn to them and wanted to see them grow and expand.

That was my experience with him and his support for ROC USA. NCB remains one of our strongest bank partners and has loaned in conjunction with us tens of millions of dollars to Resident Owned Communities.

Our Board Chair, Andrea Levere, serves on the NCB Board. Of Chuck, she says, “While I was honored to be nominated by President Obama to serve on the NCB Board as an advocate for low-income communities, I was even more honored to have the opportunity to work with Chuck. His leadership was deeply grounded in his commitment to advancing the promise and power of cooperatives to advance economic and social justice. His investment in ROC USA has been essential to our growth and impact, and we will remember his legacy in every resident-owned cooperative community we support in the future.”

Chuck invited ROC USA to showcase our work at the bank’s 2018 Annual Meeting in D.C. and he sponsored a tremendous video as a part of it. He wanted a video that told the story of resident ownership. He also supported the bank’s lead sponsor role of the ROC Leadership Institute because he knows the value of leadership development.

Chuck was a friend and a wonderful cooperative business partner who deeply respected Resident Owned Community Members and leaders. He would love hearing the stories of your communities. Kim Capen represented all ROCs when he spoke at the 2018 Annual Meeting of the bank.

Chuck was inducted into the Co-op Hall of Fame in 2012. Here’s his inductee video. Please take a look. It’s inspiring.

My heart goes out to Chuck’s wife and girls and family, his colleagues at the National Cooperative Bank and to everyone who knew and was touched by Chuck’s work. He touched far more of us than people will ever know. 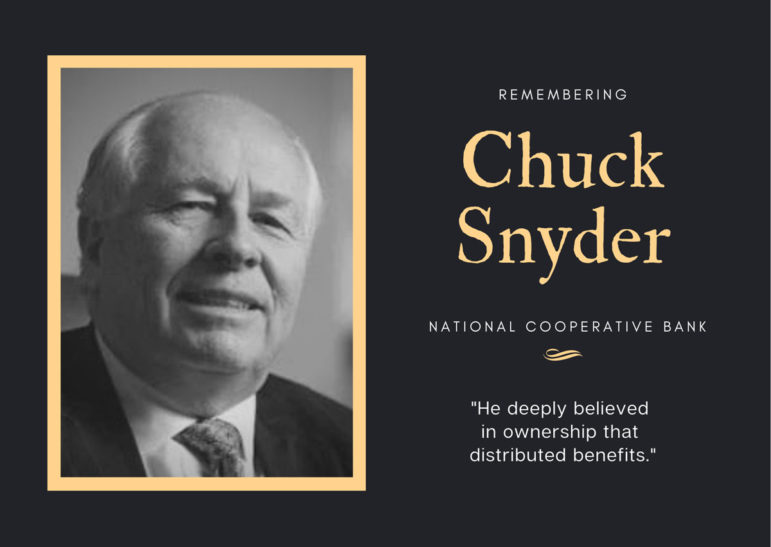